Persian – also known as Farsi, although this term is considered as incorrect by many academics – is an Indo-European language of the Indo-Iranian branch. Persian and its varieties have official-language status in Iran, Afghanistan and Tajikistan. And Farsi has been called Dari in Afghanistan, due to political reasons only. Historically Persian (as a direct descendant of Old Persian) is a more widely understood language in an area ranging from the Middle East to India. Significant populations of speakers can be found in other Persian Gulf countries (Bahrain, Iraq, Oman, the People's Democratic Republic of Yemen, and the United Arab Emirates), as well as large communities in the USA.

There are approximately 80 million native speakers of Persian in Iran, Afghanistan, Tajikistan and Uzbekistan and about the same number of people in other parts of the world speaks Persian, at least as a second language.

Persian language was continuously preserved and developed through centuries and its own evolution phases, from Old Persian via Middle Persian to New Persian (the modern version of Persian spoken today). The New Persian actually is the direct follower of Old Persian and Persian language is among the oldest ones with preserved original texts. Due to its script, it is commonly mistaken for Arabic, or considered a variation of Arabic language. This is far from truth, as the alphabet set is actually the only resemblance of the languages. Persian sounds much different, with its own grammar and syntax. Similar to comparing e.g. German and French, both share the alphabet set, but are not mutually interchangeable. In fact, Arabic and Persian do not even share the language family, as Persian originates from the Indo-European language tree, while Arabic belongs to Afro-Asiatic (or Semitic) family.

Interestingly, words in Farsi are written from right to left, but numbers are written from left to right. And all is written in cursive only. The modern Persian alphabet is based on Arabic script, but has 32 letters - 4 more than Arabic. One variety of Persian, the Tajiki (spoken in Tajikistan and Uzbekistan) is written in Cyrillic script.

Autumn in Japan is a beautiful time with leaves on the trees changing color and a lot of crops ripe and ready for use in the famous seasonal Japanese cuisine. People enjoy going out during this time of the year to enjoy the cool, crisp weather and attractive vistas. The autumn weather is also perfect for outdoor sports, which is why sports events are held ritually during the season.

Every year schools all over Japan have “Undokai” (sports festivals) and students from different schools, grades and classes compete against each other in various athletic activities. Students in schools traditionally divide into two main teams distinguished by team colors - red and white (based on Japanese nation branding). There are many activities in which students participate and compete – such as track and tug of war (which western cultures are also well familiar with). However, there are many other popular activities in Japan, which are not seen widely in western sports events.

Battle of Samurais and Collect the Elderly

There are numerous typically Japanese competitions and activities during autumn.

“Kibasen” – “Ki” is “samurai”, “ba” is “horse”, “sen” is “battle” – is a traditional activity where the teams consist of 3 people (two for the horse and a rider, the samurai), where the "samurai" tries to catch the hats from other student samurais. The team with the most hats wins. 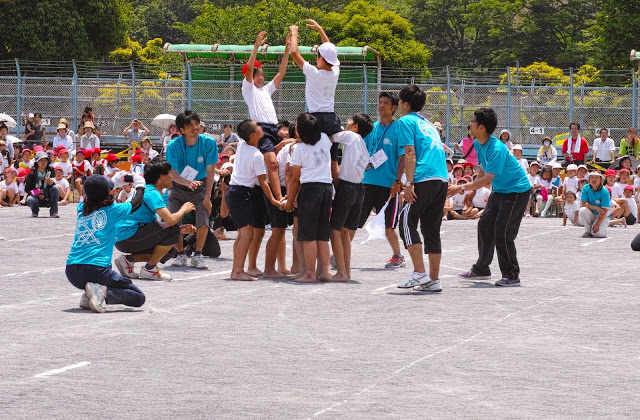 “Karimono Kyoso” – “borrowing race” is another popular activity where students receive a note with something they have to find and “borrow” around them. It can be anything from a stick of deodorant to somebody who is over 70 years old.

“Amekui Kyoso” – “candy eating race” is the messiest activity, but probably brings the biggest outbursts of laughter. Students race around a track with tables holding pans filled with flour and candy. The candy is white so you can't see it mixed in with the flour. The rule is you can’t use your hands, but you need to retrieve the candy from the pan with your mouth. So we have many floury faces racing down the track to the finish line :)

As you can see “Undokai” is not just a standard sports event with students simply competing against one another, but is an event to have fun, enjoy and bring unity within the student body. In the words of Michael Jordan “Just play. Have fun. Enjoy the game.”

Ukrainian is the state language of Ukraine, the national language of Ukrainians. It belongs to the Slavic languages (the Eastern-Slavic group), being a part of the Indo-European language family, and is currently emerging from a long period of decline. The total number of the Ukrainian speaking population is estimated to around 39 million people. Ukrainian language is also spoken in Russia, Poland, Canada, Slovakia, Byelorussia, Argentina, Brazil, Australia and Transdniestria (Moldova).

Historically, Ukrainian originates from Old Russian language. Until the 20th century, the language was even called "Little Russian", or Rusyn language in Poland and Slovakia.*

The vocabulary of the language is based on words with common Slavic origin, but it also contains a great number of words formed during the period of its own historical development. Ukrainian includes a number of borrowed words that originally come from German, Polish and other languages. This was mainly due to political reasons, as Ukraine has undergone various levels of influence from  Poland, Lithuania, Austro-Hungary, Czechoslovakia, Germany and, of course, Russia.

The official approach to the use of Ukrainian in modern Ukraine has gone from complete neglect and even suppression and bans to popularization (mainly in the 19th and at the beginning of 20th century), and there has even been "ukrainization" (e.g. after the communist putsch in Russia, and now today once again) – seemingly as a result of current needs, trends, and development.

Face of the nation

Since 1991, independent Ukraine has made Ukrainian the only official state language and implemented government policies to broaden the use of Ukrainian (often replacing Russian). Lately, this has been viewed as controversial, predominantly in the eastern parts of the country, where a strong enclave of Russians opposes the policy and demands equality of the Ukrainian and Russian languages.

The Ukrainian alphabet is based on the Cyrillic alphabet and has 33 letters.

*There are many disputes over the classification of Rusyn. While it has its own ISO code, is spoken by the minority of Rusyns in Eastern Europe (mainly Slovakia and Serbia), and is even one of the official languages of the Vojvodina autonomy, it is also considered only a dialect of Ukrainian – interestingly enough, by Ukraine itself.

Translation Memory products constitute an excellent aid for translators and help them to translate bigger volumes in less time. However, there are dangers with using such products also. Poor memories is one thing, but translator fatigues is another that can lead to serious issues and very unhappy clients, especially when working with fuzzy matches.

Some of the more critical errors can be prevented with a so-called opposite translation check.

What is Opposite Translation?

Opposite translation happens when a word gets translated with the opposite meaning, e.g. if Up gets translated as Down, In as Out or On top with Under. Suppose, for example, that a German translator gets tired and misses changing e.g Rechts (right) to Links (left) in a text segment, the outcome could very well be a serious mistake in the final document. The second language reviewer should detect this error, but human error is something that’s difficult to completely stamp out. To protect against this, translators and language reviewers should be warned whenever a suspicious opposite translation is detected.

At idioma we use our in-house developed translation platform, iQube, with support for numerous file formats and a built-in Quality Assurance checker, to alert translators in such cases.

When the meaning becomes completely the opposite

This iQube semantic feature can detect opposite translation of the most common terms and supports around fifty different languages, in all imaginable combinations, and it includes warnings for wrong translation such as: - Under instead of Over - Before instead of After - Disassemble instead of Assemble – and many, many mores – and of course also in reverse. This feature of our iQube translation platform is unmatched by any other product in the market. One of its outstanding features involves advanced morphology to detect opposite translation of critical terms. The Opposite Translation check complements all the other 50+ Quality Assurance checks to further improve quality of translated text.

The Quality Assurance checks are part of a mandatory workflow process in all translation projects with 3-stage QA checking: by the translator, by the language reviewer, and finally by in-house QA staff. The checks have cut down significantly on unnecessary human errors, especially those that involve fuzzy matches taken over from translation memories.

This allows us to focus on providing uncompromising high-quality translation, where a full TEP process (Translation – Editing – Proofreading fully complying with  the DIN EN 15038 standard) is mandatory for all the texts we handle – all this at very competitive rates.

To learn more about our services, please contact our project managers.